On 17 June 2020, in the hall of the University of finance, business and entrepreneurship (VUZF), the ceremony of awarding the winners of the National Audit Competition for Students “Young Auditor” for 2020 was held.

The competition is organized for the ninth consecutive year by the University of finance, business and entrepreneurship (VUZF) and the auditing companies HLB Bulgaria and Zaharinova Nexia.

Five students won plastics, cash prizes, internships and scholarships to study in this year’s edition of the competition.

Its aim is to promote the audit profession among young people in Bulgaria, as well as to emphasize the role of audit in the business community and society as a whole.

The official partners of the competition in this year’s edition were the Bulgarian National Audit Office, the Commission for Public Oversight of Statutory Auditors (CPOSA) and the Institute of Certified Public Accountants (ICPA).

The host of the ceremony was Assoc. Prof. Dr. Radostin Vazov, Vice-Rector for European Projects and Continuing Education of VUZF

In his greeting at the opening of the ceremony, the rector of VUZF, Assoc. Prof. Dr. Grigory Vazov, noted that despite the difficult times in which we live, this competition has a tradition and it should not be violated. “Over the years, this has become the most serious competition in the audit profession. We have history, we have experience and I am sure that in 20 years this competition will be something unique for the Bulgarian financial and educational business, “said Assoc. Prof. Vazov.

A special congratulatory address to the organizers of the competition by Mr. Boyko Atanasov, Chairman of the Financial Supervision Commission, was read by the host of the ceremony.

The first place in the competition was won by Victoria Miladinova, a student at the University of National and World Economy. She received a cash prize of BGN 2,000 to finance her higher education in Bulgaria, established by the auditing companies HLB Bulgaria and Zaharinova Nexia, as well as the opportunity for a one-month internship in one of the two companies. The award was presented by Ms. Menda Stoyanova, Chair of the Committee on Budget and Finance in the 44th National Assembly. “We are very happy about this great interest in this hard and difficult profession – the auditor,” said Ms. Stoyanova. She wished all the participants and the winners of the competition to like the auditing profession and to work with dedication and love.

The second place in the competition was won by Vasilena Georgieva, a student at the Southwestern University “Neofit Rilski”. The award, in the name of “Academician Ivan Gyuzelev”, established by the Bulgarian National Audit Office, amounts to BGN 1,000, for a master’s degree in higher education in Bulgaria and the right to one month’s internship at the institution. The award was presented by Mr. Tsvetan Tsvetkov, Chairman of the Bulgarian National Audit Office.

Third place in the competition was won by Christiana Hristova from the University of Economics – Varna. The award, in the amount of BGN 1,000, established by the Commission for Public Oversight of Statutory Auditors, for financing an educational degree in a higher school in Bulgaria, was presented by Mr. Stefan Belchev, a member of the CPOSA.

At the ceremony were awarded 2 special prizes for participants with the most original ideas in solving cases. The first additional prize was won by Kostadin Patrashkov, a student at the University of National and World Economy, who won BGN 500 to finance his higher education in the country established by ICPA. His award was presented by Mr. Velin Filipov, Deputy Chairman of the Board of ICPA.

The second special award was presented to Diana Georgieva from the Academy of Economics “Dimitar A. Tsenov” – Svishtov by the Rector of VUZF Assoc. Prof. Dr. Grigory Vazov. The award is a scholarship for training in the amount of 15% of the tuition fee in the master’s programs of VUZF.

The finalist of last year’s edition of the competition – Jivana Pepik welcomed the winners and participants in this year’s edition and told them that her participation in this competition has boosted her professional development and career, which continues in one of the largest audit companies “Zaharinova Nexia ”.

The competition was attended by students from over 10 universities in the country, including VUZF, Sofia University “St. Kliment Ohridski ”, UNWE, Academy of Economics“ D. A. Tsenov ”- Svishtov, University of Economics – Varna, Southwestern University“ Neofit Rilski ”, Plovdiv University“ Paisii Hilendarski ”, Varna Free University“ Chernorizets Hrabar ”, University of Ruse“ Angel Kanchev ”and others. To the second round 50 participants were admitted solving the test. By the third round, solving the case, those who passed the test were admitted with over 60% correct answers.

Official guests of the ceremony were Mrs. Menda Stoyanova, Chairman of the Committee on Budget and Finance in the 44th National Assembly, Mr. Tsvetan Tsvetkov, Chairman of the Bulgarian National Audit Office, Prof. Dr. Boris Grozdanov, Chairman of the Fiscal Council of Bulgaria, Ms. Stefka Stoeva, Chair of the Central Electoral Commission (CEC), Mr. Velin Filipov, Deputy Chair of the ICPA Board, His Excellency Archimandrite Pachomius, Rector of the Sofia Theological Seminary, Ms. Svetla Nestorova, Chairman of the Management Board and Chief Executive Officer of 3EAD Bulstrad Life Vienna Insurance Group EAD, etc. representatives of state institutions, the financial, insurance and auditing elite, teachers from universities in the country.

The ceremony was broadcast live on the VUZF Facebook page.

An additional accompaniment to the festive atmosphere of the event were the musical performances of the piano by Prof. Dr. Virginia Zhelyazkova, Vice-Rector for Academic Affairs and Quality of VUZF.

Traditionally, the event ended with a general photo of the awarded participants, the organizers of the competition and the official guests.

You can see a full recording of the ceremony at 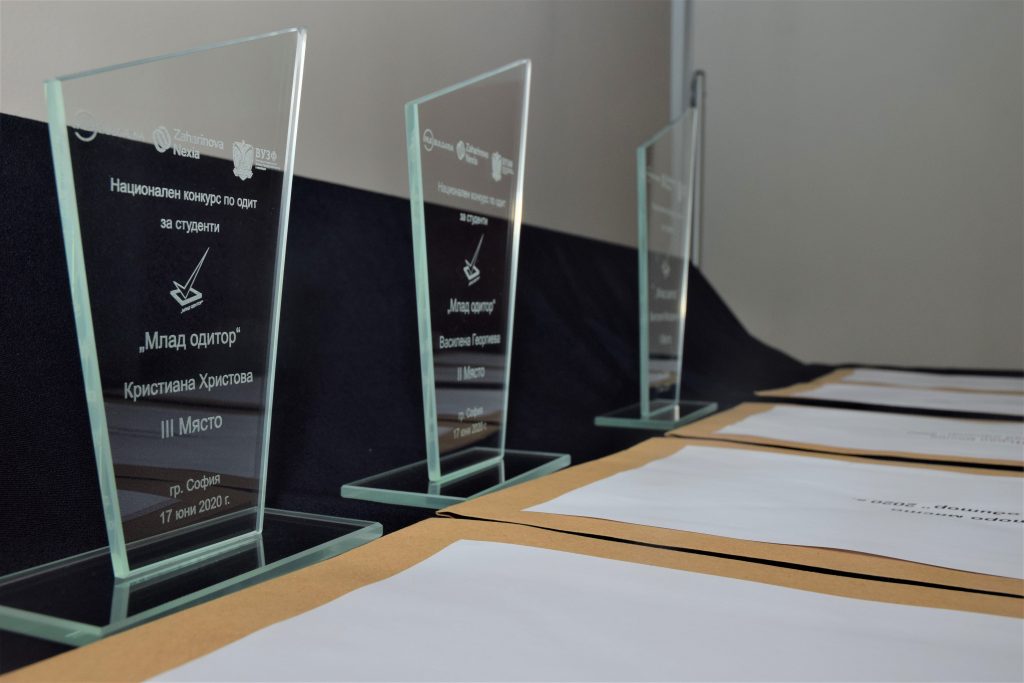 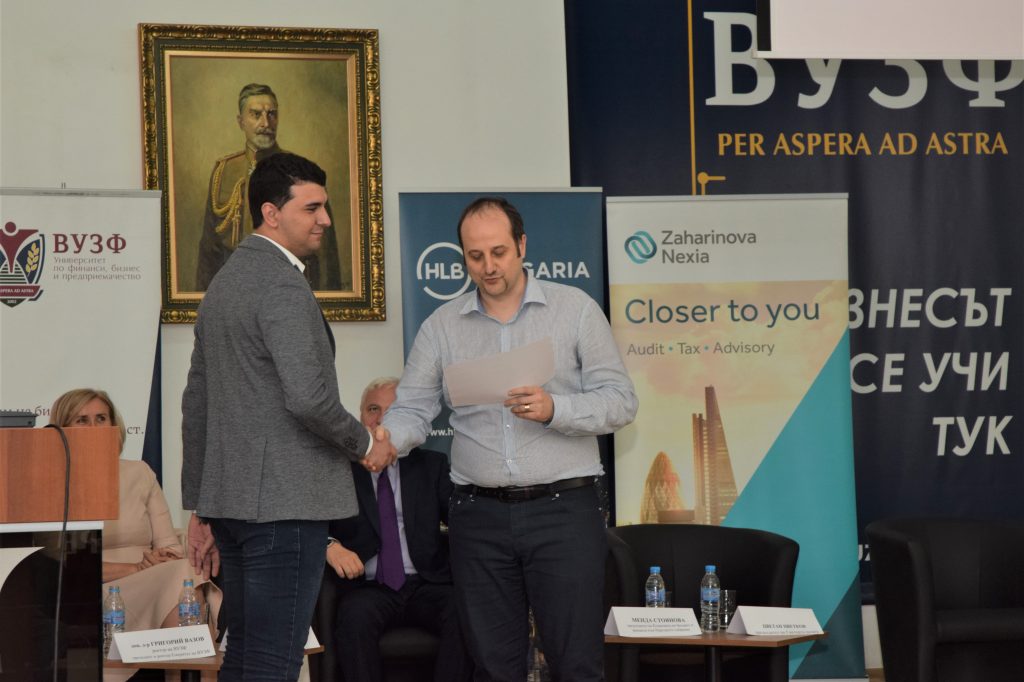 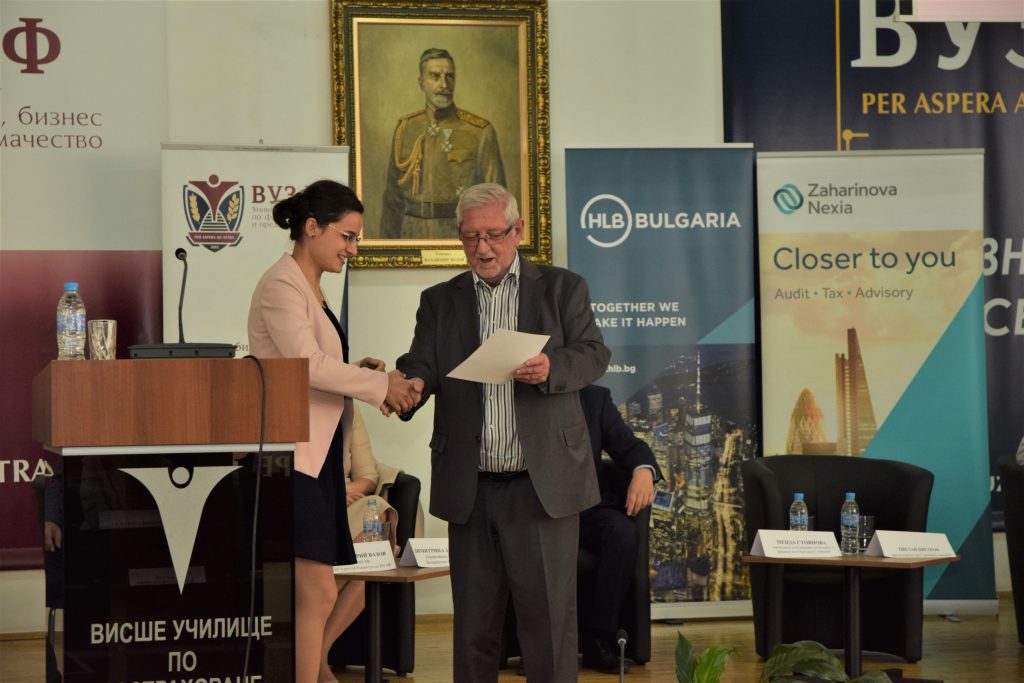 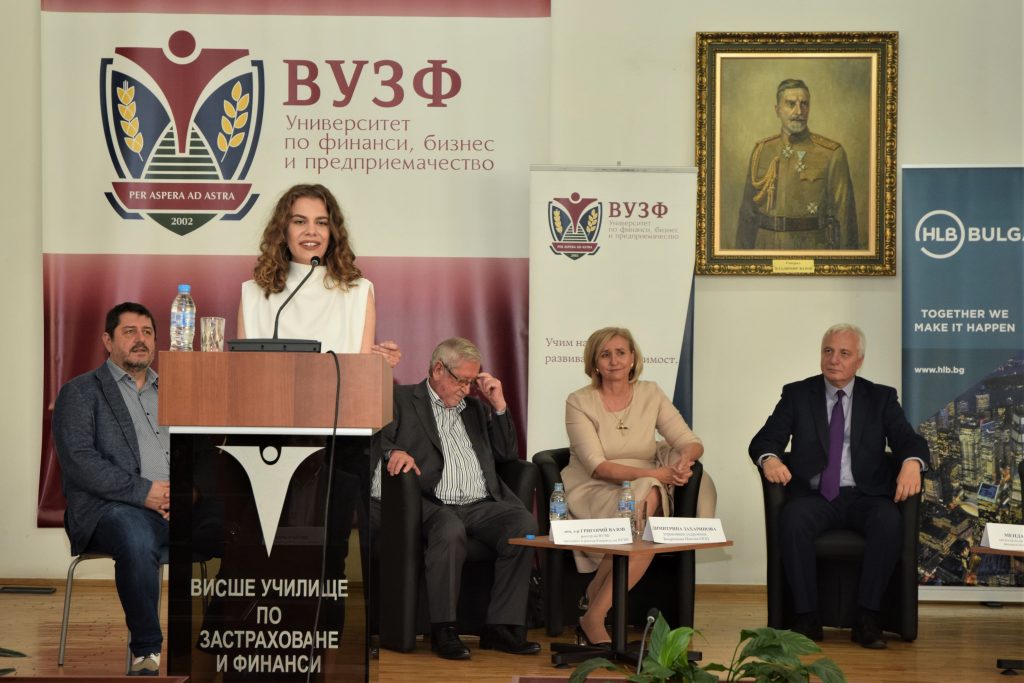 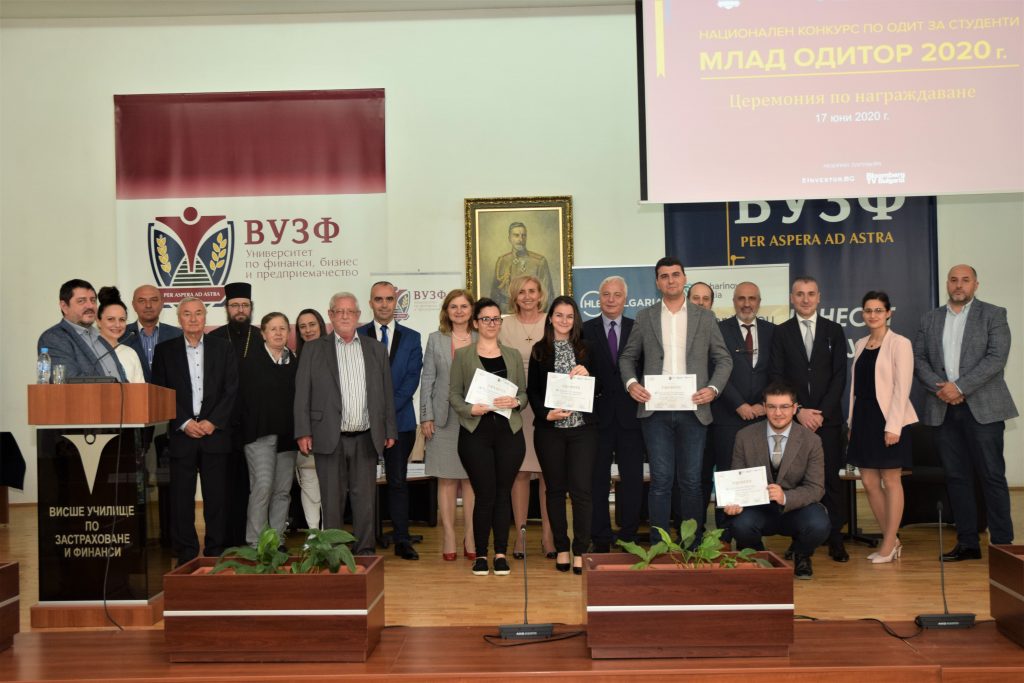