Students from Bulgaria and abroad were awarded in the 10th anniversary edition of the national competition “Young Auditor” 2021.

On June 9, 2021 in the hall of the University of Finance, business and entrepreneurship (VUZF) was held the official ceremony of awarding the winners in the 10th edition of the National Audit Competition for Students “Young Auditor” 2021.

The competition is organized by VUZF the auditing companies HLB Bulgaria and Zaharinova Nexia. The main partners of the competition are the Bulgarian National Audit Office, the Commission for Public Oversight of Registered Auditors (CPOSA) and the Institute of Certified Public Accountants in Bulgaria (ICPA).

Its aim is to promote the audit profession among young people in Bulgaria, as well as to emphasize the role of audit in the business community and society as a whole.

The host of the ceremony was Prof. Dr. Virginia Zhelyazkova, Vice-Rector for Academic Affairs and Quality of VUZF. The talented performers from the string trio HYPNOTIC also took part in it, which contributed to the good mood of the guests of the celebration.

The ceremony was opened by the Rector of VUZF Assoc. Prof. Dr. Grigory Vazov, who thanked the organizers and partners of the competition for the perseverance and energy with which they have been holding this event for 10 years. “Without auditors, public and corporate life in Bulgaria and in the world is impossible. These are some of the most important and qualified people, and to become an auditor is a difficult endeavor that requires a lot of courage and effort, so I congratulate all students who have set out on this path, “said the rector of VUZF Assoc. Vazov.

The importance of the competition and its impact on young future professionals was the main focus of the greetings of all official guests. They admired the organizers for the perseverance with which they organize for another year this so successful and useful competition for young people.

Welcoming speeches for the anniversary edition of the competition included Mrs. Veronika Revalska, Manager of HLB Bulgaria, Mr. Tsvetan Tsvetkov, Chairman of the Bulgarian National Audit Office, His Excellency Archimandrite Pahomiy, Rector of Sofia Theological Seminary “St. Yoan Rilski”. On behalf of the Chairman of the Financial Supervision Commission, Mr. Boyko Atanasov, a greeting was given by Ms. Diana Yordanova, Deputy Chairman of the FSC, Head of the Insurance Supervision Department.

The first place in the competition “Young Auditor” was won by Arthur Torosyan, a student at the VUZF. He received a cash prize of BGN 2,000 to finance her higher education in Bulgaria, established by the auditing companies HLB Bulgaria and Zaharinova Nexia, as well as the opportunity for a one-month internship in one of the two companies. The award was presented by Ms. Menda Stoyanova, Chair of the Committee on Budget and Finance in the 44th National Assembly. “

The second place in the completion was won by Gabriela Ivanova, student at the VUZF. The award in the amount of BGN 1,000, established by the Commission for Public Oversight of Statutory Auditors, for financing an educational degree in a higher school in Bulgaria and opportunity for a one-month internship in one of the two companies HLB Bulgaria and Zaharinova Nexia. The award was presented by Prof. Dr. Ognyan Simeonov, the Chairman of CPOSA.

Third place in the competition was won by Alexander Shargov from Moldova, student from the University of National and World Economy. The award, in the amount of BGN 500, established by Institute of Certified Public Accountants (ICPA), for financing an educational degree in a higher school in Bulgaria and opportunity for a one-month internship in one of the two companies. His award was presented by Mr. Boyko Kostov, Chairman of the Board of ICPA.

At the ceremony were awarded 2 special prizes for participants with the most original ideas in solving cases. The award is a scholarship for training in the amount of 15% of the tuition fee in the master’s programs of VUZF was won by Elena Tarakova from University of National and World Economy. The award was presented by the Rector of VUZF Assoc. Prof. Dr. Grigory Vazov. The second special award was presented to Damyana Yaneva from the University of Economics – Varna by Mr. Tsvetan Tsvetkov, Chairman of the Bulgarian National Audit Office.

A special greeting to the participants in the competition was given by the finalist and winner of the first edition of the Young Auditor Competition 2012 – Dr. Kiril Bashikarov, a graduate of VUZF, who 10 years later is part of the teaching staff of the university. He congratulated the winners and participants in this year’s edition of the competition, emphasizing that his participation in this competition has boosted his professional development and career in one of the largest audit companies.

The ceremony was attended by a number of official guests from state institutions, the financial, insurance and auditing elite, teachers from universities in the country, students and others.

You can see a full recording of the ceremony at 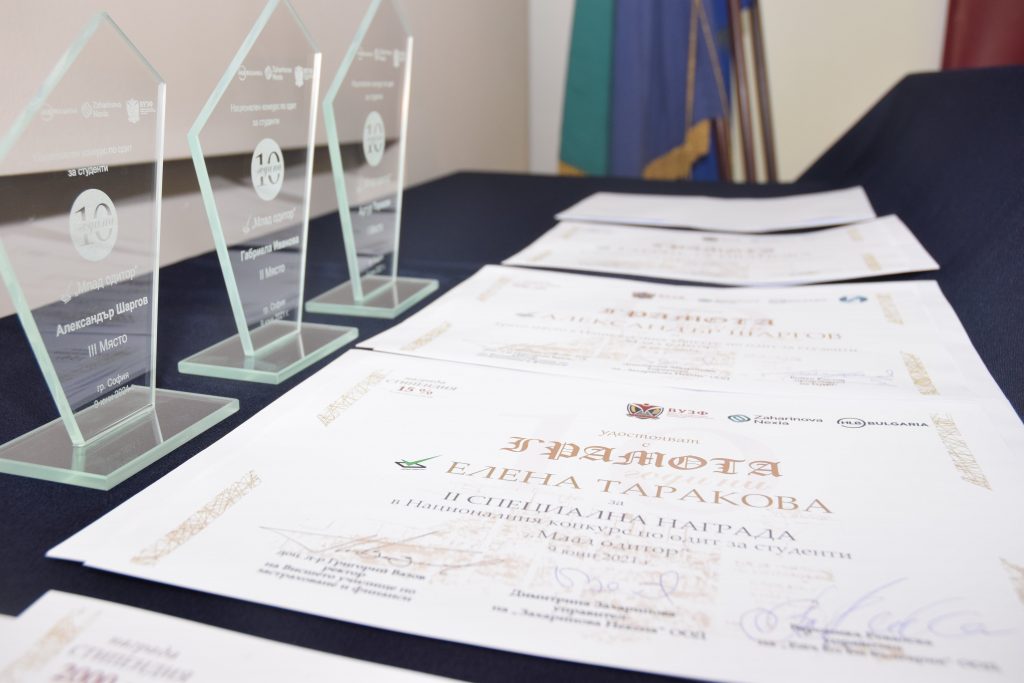 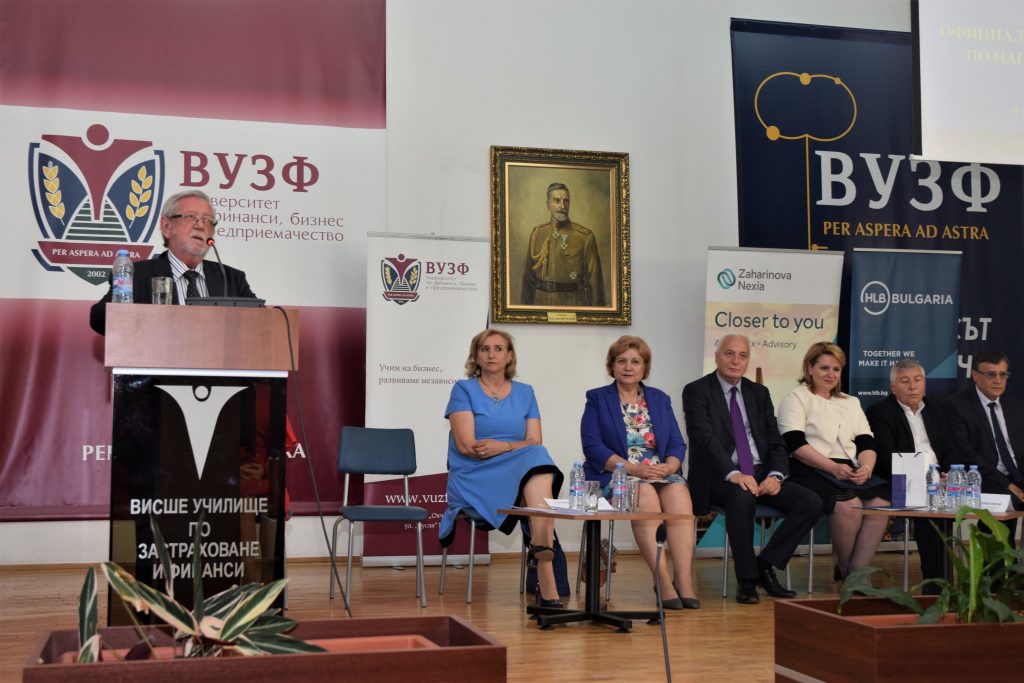 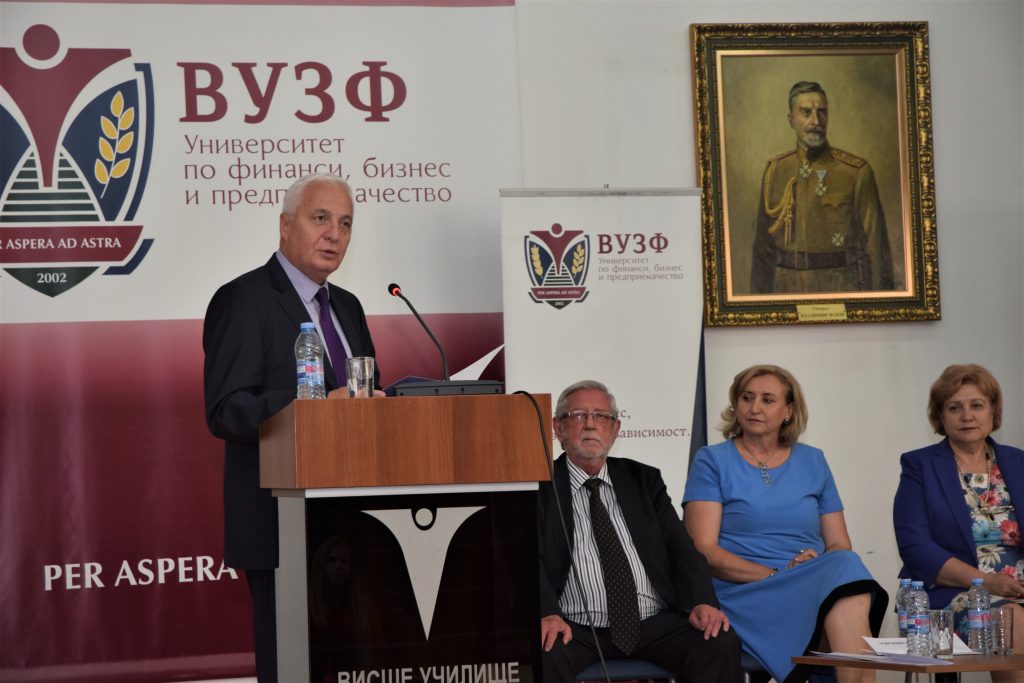 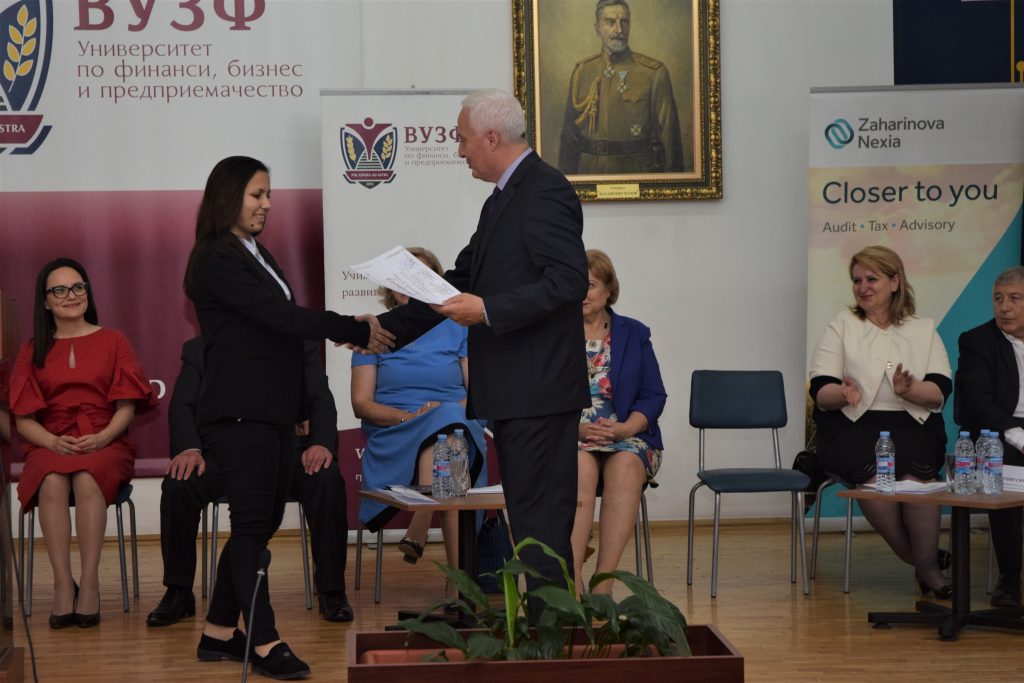 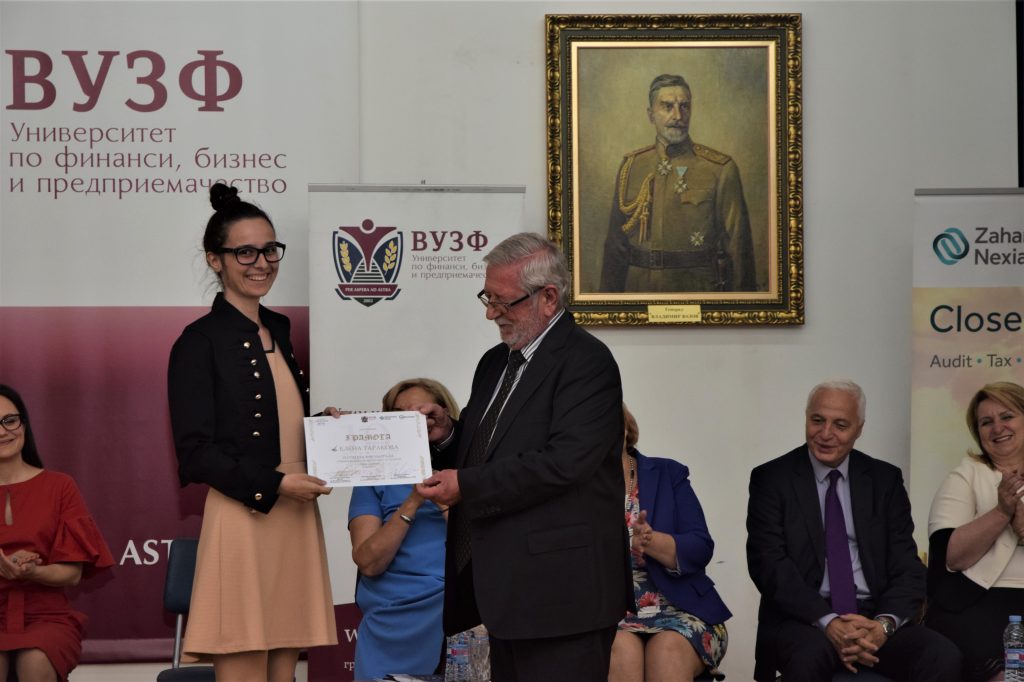 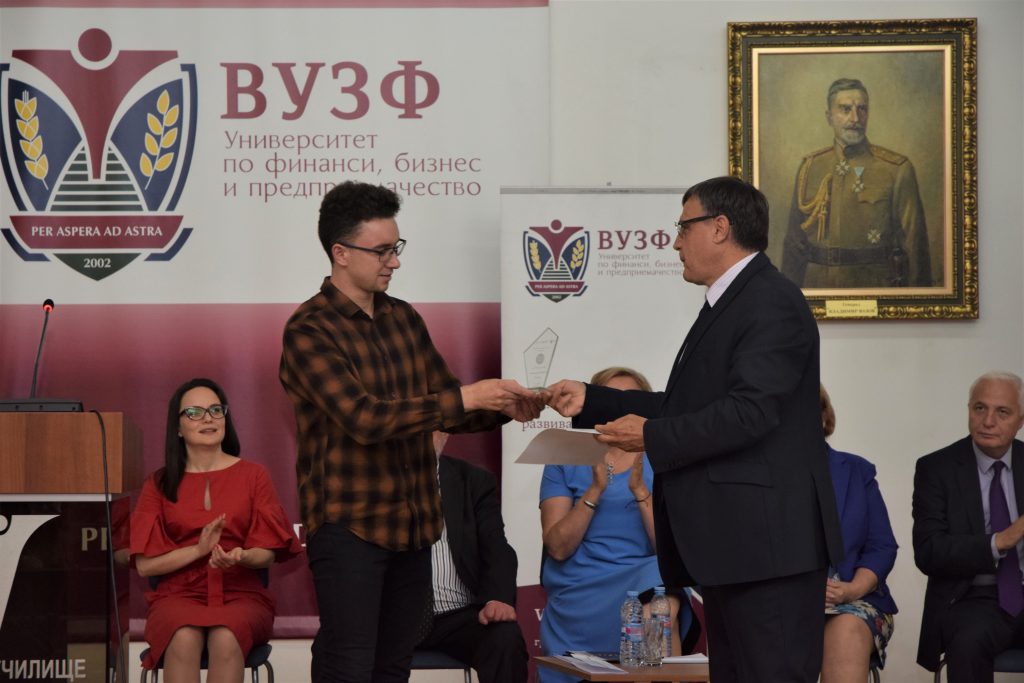 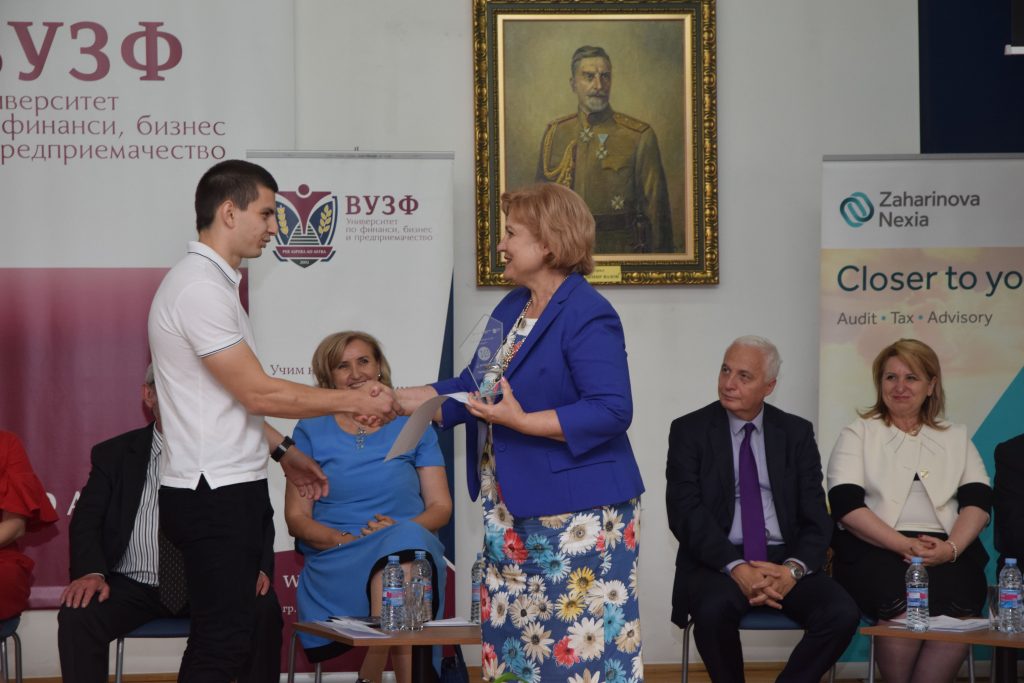 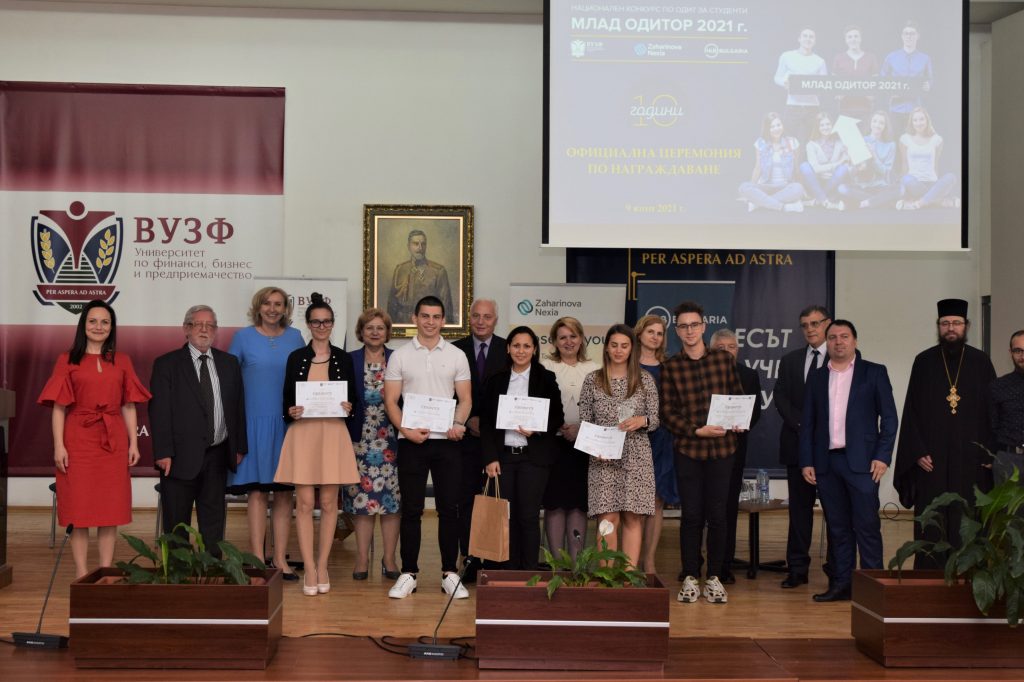